After many hundreds of years of peaceful coexistence, the internal peace of a multinational state has collapsed into an ethnic conflict.

The air is dark with hails of arrows and thick with stench of blood, smoke, and metal, as old hatreds, distrust, and historical claims raise the swords and march the troops.

There is no hope of peace in sight as the self-righteous wage war, the innocent pay the price, and fight rages on without an end.

The only question is: will you fight for freedom—or integrity?

The night is dark before the dawn. And the dawn is far. 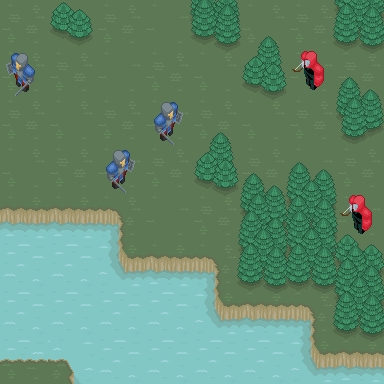 The subjective vision of the creator of Far Dawn is that contemporary real-time strategy games have evolved too far towards the direction of maniacal clickfests.

There is a widespread notion that winners of contemporary competitive RTS games are determined not primarily by their strategic or tactical decisions but by their ability to maintain continuous high APM, to incessantly utilize memorized hotkeys and shortcuts, and to jump around on the minimap, multitasking and micromanaging base building, resource accumulation, and individual troops engaged in combat at the same time.

Far Dawn aims to shift towards emphasizing gameplay success based on strategic and tactical decisions.

By implementing gameplay and user interaction improvements over past RTSes, Far Dawn takes away a sizeable portion of burden, pressure, and wasted time off micromanaging individual actions. This allows the player to focus on the big picture with economic decisions—when and where to expand their base, which units to produce, whether to spend their resources on offensive units or defensive towers—without having to all the time be ordering and following their worker units around their homebase.

This big picture focus similarly applies to directing combat: instead of spending their focus, nerves, time, and energy on micromanaging spellcasting targets and maneuvering their units back and forth at the frontline, by macromanagement of large masses of combat units the player will generally achieve better results than trying to acquire any small, marginal tactical edge over the enemy by individual unit-level commands.

Far Dawn portrays warfare and combat where the big picture, high-level decisions, and mass commands play a bigger role and make greater difference than the actions of individual pieces on the board.

This is also why Far Dawn consciously returns back to pre-2002 RTS paradigm and will not feature superunit hero–centered gameplay.